Today we are in the Thintanks factory which is located in Regency Park, Adelaide where the complete range of water tanks are manufactured.

How These Slim Water Tanks Are Made

The process used in the manufacture of these siim tanks is called Roto Moulding. We currently have the 1000 litre mould and you can see that we are filling the bottom half of the aluminium mould with polyethylene powder.

You may also notice the mould itself has over 90 pins, or cross connectors in it, and it is these cross connectors that give the water tank its strength and allow it to be so thin. Once the correct amount of powder is placed in the bottom of the mould the top is then put in place and the two parts of the mould are clamped together.

The mould is then lifted and placed in a very large oven, which has a very finite temperature control system.

We can now see both the 1000 litre and the 3000 litre mould has been prepared to be placed into the oven which is in operation nearly 24 hours a day. Once the Thin Tank mould is in the oven the mould is then rotated using the large arm and it is the heat of the oven that liquify the polyethylene powder, which begins to coat the inside of the mould.

All polyethylene rainwater tanks are manufactured using this method.

The Process Is Called Rotomoulding 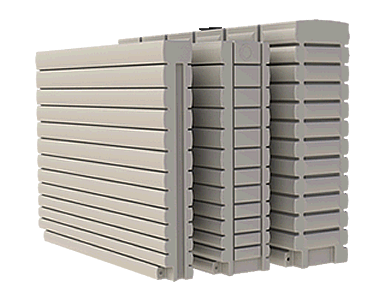 The factory where our ThinTanks are manufactured is state of the art employing the latest technology in rotomoulding and some of the most experienced staff available.

The tanks when in the oven are rotated both on the x and y axis, and this assists in getting the polyethylene powder, which is now in liquid form, to line the mould evenly. You can see this movement of the moulds on the large arm as they are been removed from the oven.

Once removed from the oven, the ThinTanks are then required to go through a ” Cool Down” process, which takes between 20-25 minutes in total. This part of the process is quite critical and cannot be rushed.

This ” Cool Down” process is assisted by a fans and a fine mist spray which is directed at the outside of the mould as the tanks still spin on the large mechanical arm. The moulds used for the full range of the ThinTanks are quite intricate compared to the general mould of a standard slimline tank.

As previously noted, the main difference with the ThinTanks mould is the patented cross connectors which give the tank its strength. These cross connectors, together with the thick walls of the thin tank stop it from bellowing out or bulging which has been a major problem in past designs of super slimline tanks.

The design process of this slim water tank range took over 2 years in total, and our tanks can have between 20-30% more powder in them, compared to the other slimline tanks on the market right now.

The strength and compact dimensions of this thin tank together with its ascetically pleasing looks makes it the premium poly rainwater tank on the Australian market today.

Once the cooling process has been completed the mould is removed from the large rotomoulding arm and lifted down to the floor in preparation to have the new ThinTank removed. Once the tank is on the floor the vents are opened to release the hot air which has been trapped within the mould during the cooking process.

The clamps and bolts are also released allowing the two halts of the mould to once again be separated.

The top half, which now contains the new Thintank, is then moved over to our finishing table.

The table is lined with a thick plush carpet so as not to scratch the new tank as it is removed from the mould. Once on the table the top part of the mould is then lifted off and our water storage tank is now complete.

The newly manufactured water tank then has any small burrs removed and is polished ready for shipping to one of our many clients.

Prior to shipping, all tanks are tested using light and an ” under pressure ” water test to ensure the highest quality is being delivered to our customers.